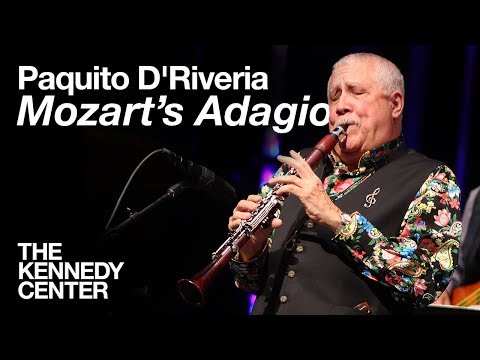 Paquito will be the guest host of Show 383 in Boston.

Paquito D’Rivera defies categorization. The winner of fourteen GRAMMY Awards, he is celebrated both for his artistry in Latin jazz and his achievements as a classical composer.

Born in Havana, Cuba, he performed at age 10 with the National Theater Orchestra, studied at the Havana Conservatory of Music, and became a featured soloist with the National Symphony of Cuba at age 17. As a founding member of the Orquesta Cubana de Musica Moderna, he directed that group for two years while also playing both the clarinet and saxophone with the Cuban National Symphony. He was also a founding member of the United Nation Orchestra, a 15-piece ensemble organized by Dizzy Gillespie to showcase the fusion of Latin and Caribbean influences with jazz. A GRAMMY was awarded to the United Nation Orchestra in 1991, the same year D’Rivera received a Lifetime Achievement Award from Carnegie Hall for his contributions to Latin music.

Mr. D’Rivera’s numerous recordings include more than 30 solo albums. While his discography reflects a dedication and enthusiasm for Jazz, Bebop and Latin music, his contributions to classical music are equally impressive. They include solo performances with the London Philharmonic, the London Symphony Orchestra, the Warsaw Philharmonic Orchestra, the National Symphony Orchestra, and the Baltimore Symphony. With his passion for bringing Latin repertoire to greater prominence, Mr. D’Rivera has successfully created, championed, and promoted all types of classical compositions, including his three chamber compositions recorded live in concert with distinguished cellist Yo-Yo Ma in September 2003.

In addition to his extraordinary performing career as an instrumentalist, Mr. D’Rivera is an accomplished composer, with the prestigious music house Boosey and Hawkes as the exclusive publisher of his compositions. Recent recognition of his compositional skills came with the award of a 2007 John Simon Guggenheim Fellowship in Music Composition and the 2007-2008 appointment as Composer-In-Residence at the Caramoor Center for Music and the Arts with the Orchestra of St. Luke’s. His numerous commissions include compositions for Jazz at Lincoln Center, the Library of Congress, the National Symphony Orchestra, and the Rotterdam Philharmonic.

Mr. D’Rivera has received fourteen GRAMMY Awards, including Best Latin Album, Best Classical Contemporary Composition, Best Classical Recording, and Best Latin Jazz Album. He is also the recipient of the 2005 NEA Jazz Masters Award, a 2005 National Medal of the Arts, and the 2007 Living Jazz Legend Award from the Kennedy Center, Washington, D.C. Other honors include Doctorates Honoris Causa in Music from the Berklee School of Music in Boston and the University of Pennsylvania and the 2004 and 2006 Jazz Journalist Association’s Clarinetist of the Year Award. In 2008, Mr. D’Rivera received the International Association for Jazz Education President’s Award, the Frankfurter Musikpreis in Germany, and the Medal of Honor from the National Arts Club in 2009. In 2010, he was named a Nelson A Rockefeller Honoree and given the African-American Classical Music Award from Spelman College.

In 1999, and in celebration of its 500 year history, the Universidad de Alcala de Henares presented Paquito with a special award recognizing his contribution to the arts, his humane qualities, and his defense of the rights and liberties of artists around the world. The National Endowment for the Arts website affirms “he has become the consummate multinational ambassador, creating and promoting a cross-culture of music that moves effortlessly among jazz, Latin, and Mozart.”