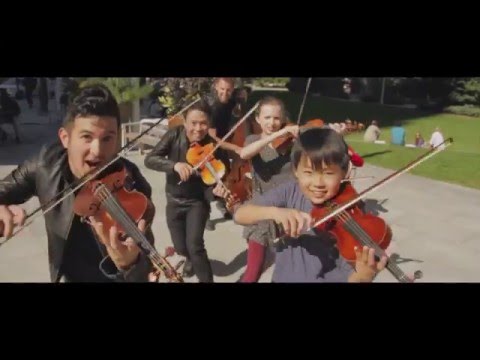 Most recently, Charlotte was announced as a finalist in the violin division of the 2018 Johansen International Competition, winning the Second Prize of $7,000.

Charlotte was a 2015 recipient of the Jack Kent Cooke Young Scholar Award.

Charlotte plays in one of our most popular See the Music videos of all time, a collaboration with Time for Three in a cover of Taylor Swift’s “Shake it Off.”

You can also see her playing at historical sites around Boston in our 4th of July video.

Charlotte appeared most recently on Show 364 in Beaver Creek, CO on January 16, 2019

Charlotte Marckx (violin), 16, is a junior at Interlake High School in Bellevue, Washington. She studies with Simon James and Robert Lipsett. She was the Gold Medal and Bach Prize winner at the 2018 Stulberg International String Competition. She was a second prize-winner in the 2018 Johansen International Competition. Charlotte was a 2015 recipient of the Jack Kent Cooke Young Scholar Award. She has previously performed on From the Top as a duo with her sister and appeared in From the Top’s video cover of “Shake it Off”. In her spare time, Charlotte has written a novel.

Charlotte Marckx also performed solo and with her sister Olivia Marckx on Show 297, recorded in Storrs, CT, on November 1, 2014.

Charlotte Marckx (violin), 13, is from Bellevue, Washington, where she studies violin with Simon James and Jan Coleman. This past March, Charlotte was the youngest competitor at the 2015 Johansen International Competition for Young String Players, and one of four violinists that advanced to the final round. Charlotte won the 2014 Seattle Young Artists Music Festival, and is a four-time first-place winner of the Seattle Music Teachers Simon Fiset Competition. She has soloed with the Seattle Festival and Seattle Philharmonia Northwest Orchestras, and been featured on both NPR’s From the Top and KING FM’s Northwest Focus Live. She is currently a finalist in the 2015 KING FM Young Artists Awards. Charlotte also loves to fiddle, performing alongside her sister in their duo Sempre Sisters. Outside of music, Charlotte enjoys writing stories.